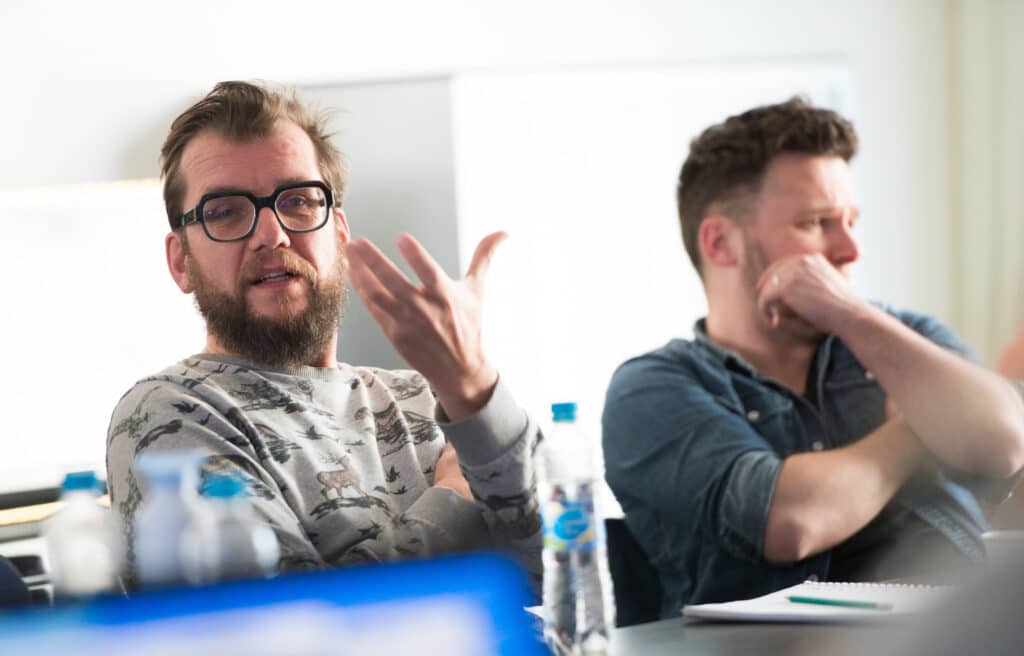 For the first year Screen Talent Europe in collaboration with CineSud will host the STE Writers Rooms (fiction)! This three-months trajectory will start September 19 and will give eight emerging filmmakers the unique chance to work on their scripts with experienced script coaches. Learn more about the selected participants and their projects here.

Eight emerging filmmakers are invited to take part in the first edition of the STE Writers Rooms. During the Writers Rooms the participants will be working on their short film in a group session with coaches Mikael Bundsen or Alexe Landgren. The first Writers Room will take part September 19, followed by a second and third session on October 23 and November 27.

Tara Mahmoudi – BACKA (partner: VGR Filmcloud)
A nerdy teenager arranges a party with her younger sister when she gets invited to an epic party that will end in disaster.

Hanna Hannerz Simå – Choir Practice / The Feminist Choir (partner: Film Stockholm)
Naive Greta has initiated a feminist choir without understanding who to include and how to organise the members of the mixed group she has gathered. She just wanted to sing!

Nicole Jachmann – Emma (partner: CineSud)
Emma is a 7-year-old girl who thinks “a hooker” is someone who sells love. She goes on a journey to find a prostitute, convinced that buying a portion of “love” will fix her parents violent marriage.

Nicolas Kouroumtzis – Adoption is an Option (partner: Odense Film Workshop)
An elderly woman awaiting her next assignment as a citizen of a utilitarian society, wants to go out of the system on her own terms.

Lorraine Higgins – Wilde Ones (partner: Galway Film Centre)
After losing their lives in a fire sisters Emily and Mary Wilde find themselves stuck in purgatory for years, with inebriated Mary in denial that she has died and Emily refusing to leave her side.

Jonathan Hughes – Yes Chef (partner: Galway Film Centre)
When Mam and Dad sit Anthony down to hold an intervention for his strange new habit, they have no idea just how quickly life as they know it will unravel.

Augustin Sjöberg – Brainless (partner: Film i Skane)
A singer in a chorus is presented with the opportunity to remove his brain to get rid of his stage fright. He takes that opportunity.

Lena Stefanie Meier – The whisper of the searoses (partner: Filmwerkstatt Kiel)
Eric flies his problems with his wife to his sister Edna and overwhelms her with his overuse of helpfulness as Edna is disabled after an accident.